This orange macramé belt was converted from an archer sash. Attached is the traditional apprentice belt favour featuring the class colour trimmed in silver. A personal touch includes three needle-felted images at the end of the belt. The first is a bow and arrow that represents the path of the apprentice. The second is Sir Admiral Anne Cash's personal heraldry. The third represents the apprentice's goal. 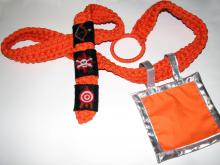 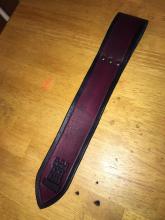 Armor grade leather. Hand made. Has the Polaris Championship Federation logo cut into it. States "Guildmaster of Reeves" around the outer edge.

A printed card on normal paper slightly larger than a credit card. Paper is white. There is a red boarder with primarily dark red text on both sides.

One side features a yellow sunburst over a blue mountain with green fields, with a banner of text on one half and the second letter of the glagolithic script, indicating 2, inside a dotted boarder. The text under it states "two boars"

The other side has a number 2 inside the doted boarder, with a black image of a boar on the other half. It contains the same words in a "dwarf script" invented by Ivo, the monarch.

Approximately 6" total in height, 18" around. Red tooled leather wings along the right and left sides secured by leather rivets. Each wing has a Polaris star in Red and Blue on it. Featured in the center is the Polaris phoenix edged in gold on a wooden shield. 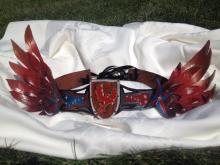 Image of a rose in the upper right and lower left corner. Text states "The Celestial Kingdom proudly presents Rose Wyngarde with a Masterhood in Rose. Through years of service, you have truly been, an example to others" 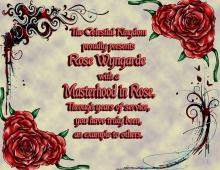 "Vote Blackwolf Wyngarde for King of the Celestial Kingdom" in Red text with a black outline. placed over a photo of Blackwolf with a sword and shield with a Dark Riders symbol on it.

"The Emerald Hills Election" across the top with an image of four individuals, each labeled "The Elf, The Fun, The Beard, The Crowns" followed by "VOTE! No matter who wins, we all win!"

An award, on brown paper, stating
"Amtgard
and the Duchy of Madoc's Keep hearby presents
Wat's Honda Fit
the 1st order of the Slayer in recognition of your 13th killstreak. You truly went above and beyond what we expected.
On this day the 4th of April of the year 2015
Duke Kevin Whitesear
Overlord Twilight S Moon"

Award has a tiretrack up the left side, and a Honda symbol with blood. Also contains Kaads Rising Winds Phoenix.